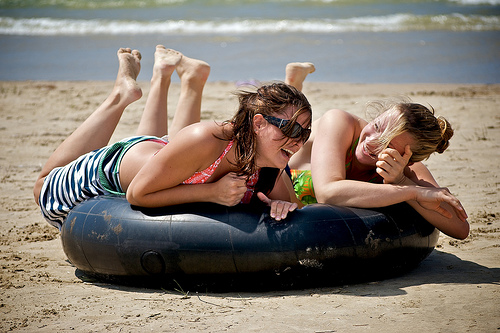 Can Sunshine Stave Off the Flu?

Here's another reason to soak up the sun this summer: new research shows that Americans' vitamin D levels fluctuate with the seasons, putting you at a higher risk of a deficiency during the winter months.

That may explain the flux in flu symptoms during the winter in the US, since low levels of vitamin D may impair the body's "innate immunity", or the first line of defense against pathogens. But to understand how vitamin D affects seasonal illness, researchers first needed to uncover how levels of the vitamin change over the course of the year.

While vitamin D occurs naturally in foods like egg yolks and oily fish, the bulk of our vitamin D comes from the sun. Researchers from the Mayo Clinic and the University of California at Irvine have found that Americans vitamin D levels peak in August and dip drastically by February. They discovered this by analyzing vitamin D levels in 3.4 million blood samples taken weekly in the US between July 2006 and December 2011.

"Our analysis, combined with other data, will help contribute to understanding the role of vitamin D in all seasonal diseases, where the simple winter/spring/summer/fall categories are not sufficient," said Dr. Andrew Noymer, associate professor of public health and lead author of the study, in a press release.

The researchers said their study looked at population averages, so people won't be able to judge their vitamin D levels based on the calendar. Health-care providers can perform blood tests to determine vitamin D deficiencies, and prescribe supplementation in individuals who don't get enough sun exposure.

Patients with back pain and other musculoskeletal conditions may also benefit from vitamin D supplementation, since the vitamin can improve the bone's ability to absorb calcium.