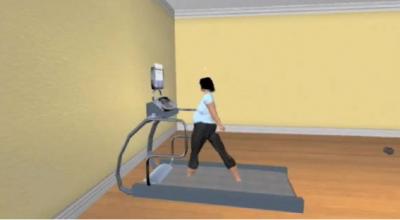 Can virtual "alter egos" help you shed some pounds? Perhaps, according to a new study that found that digital avatars can help women develop positive weight-loss behaviors. In the study, women watched videos of avatars resembling themselves making healthy eating and exercise decisions, which influenced their behavior in real-world settings.

"This pilot study showed that you don't have to be a gamer to use virtual reality to learn some important skills for weight loss," said Melissa Napolitano, PhD, lead author of the study and a professor at George Washington University School of Public Health and Health Services. "This small study suggests that virtual reality could be a promising new tool for building healthier habits."

An estimated two-thirds of Americans are overweight or obese, and many struggle to lose weight and keep it off. If shown to be effective in other studies, avatar programs could be an affordable method of helping millions of American learn healthy skills for managing and losing weight.

Earlier research has suggested that virtual reality can reinforce positive behaviors. In one study from Stanford University, people who watched videos of avatars running on a treadmill were more likely to exercise the next day if the avatar was made to look like themselves.

An avatar demonstrates walking on a treadmill at a moderate pace. Photo courtesy of Temple University Sbarro Institute for Cancer Research and Molecular Medicine.[/caption]

Napolitano and her colleagues at George Washington University and Temple University wondered whether virtual reality programs could assist people in losing weight. First they surveyed a group of 128 overweight women, the majority of whom had tried to lose weight in the previous year. The researchers were surprised to discovered that 88% of the women were willing to participate in an avatar modeling weight-loss program, despite that many of them had never played online games or used virtual reality before. In the next phase of the study, the researchers developed digital avatars to roughly resemble the women in skin color and shape. They then created simulations of avatars in certain scenarios like walking on a treadmill or choosing healthy products at a grocery store.

Eight women visited a clinic once a week to watch 15-minute videos of their digital avatars making healthy decisions. In one scenario, the women watched their avatar sit down at a dinner table and choose correct portions, and in another the avatars used a treadmill to exercise at a moderate intensity. The women also kept a food and exercise log during the study.

After four weeks, the women each had lost an average of 3.5 pounds, which is typical of for most diet plans, according to Napolitano. However, the authors hope that watching the avatars could make the women to make healthier decision in the long term.

Weight loss has been shown to be effective for reducing symptoms of musculoskeletal conditions like back pain, sciatica, and knee osteoarthritis.