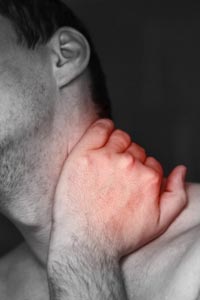 About half of patients who have a whiplash injury end up with persistent long-lasting pain, which often can't be explained by medical reasoning. Ongoing research has focused on why some people develop chronic symptoms while others do not. A variety of studies have focused on several different factors that could be associated with a vulnerability to chronic whiplash-associated disorder, or WAD.

Attachment involves an individual's concept of "self" and "others," and how they relate to each other. It affects the way that people perceive threats, respond to stressors, and regulate emotions. Attachment is thought to be developed in childhood and to typically remain stable through adulthood. Adults with problems in this area are generally characterized with either attachment anxiety, whereby they worry about the availability and relationships with others, and attachment avoidance, whereby they feel uncomfortable being close to or dependent on others. Previous research has suggested an association between attachment anxiety and a wide range of mental and physical health and pain conditions. Findings have not been clear whether the connection is due to the tendency to focus on negativity creating a likelihood to report symptoms, the inability to differentiate emotional and bodily sensations from potential threats, or other possible explanations.

On the other hand, PTSD has been found to have significant effects on patients with WAD. Research has found that patients with both PTSD and WAD report a higher level of pain and more somatic symptoms than WAD patients without PTSD. Analysts have hypothesized that this may be the result of elevated anxiety levels and avoidance behaviors, in addition to over-sensitization to pain from whiplash, also known as hyperalgesia. Some believe the connection could be for the simple reason that continuing whiplash pain reminds patients of the stress from the trauma of the collision, exacerbating PTSD symptoms.

For this study, researchers hypothesized that insecurities in the realm of attachment would predict worsened whiplash outcomes, as well as an increased likelihood to suffer from PTSD. They found that attachment problems, especially attachment anxiety, was strongly associated with low pain thresholds and catastrophizing pain, and even more so to physiological distress and PTSD symptoms.

However, the research team disproved their own hypothesis that whiplash pain would remind patients of the trauma and would then activate negative memories about the auto accident.

What their results did find was that attachment insecurity is linked to pain vulnerability and difficulty adjusting to pain, in addition to elevated levels of sensitivity, increased muscle tension, and higher anxiety.

The authors of the study concluded that PTSD and other psychological symptoms should be considered in designing interventions for patients with chronic whiplash pain. They suggested that health-care providers may need to target sensitivity and avoidance symptoms rather than intrusive memories associated with PTSD. They also wrote that attachment anxiety and other psychological problems should b addressed when treating persistent WAD symptoms.

An additional recent study found that mood disorders and PTSD can contribute to vulnerability to chronic pain.