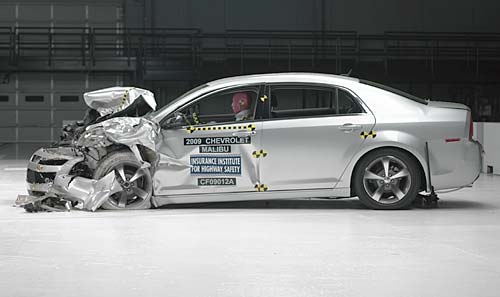 Auto safety has come a long way in the last 60 years, and it's easy to take it for granted.

A new video from the Insurance Institute for Highway Safety does an excellent job of demonstrating how far we've come in this dramatic video that shows a head-on, 40 mph offset crash between a 1959 Chevrolet Bel Air and a 2009 Chevrolet Malibu.

As you can see, the passenger compartment is severely damaged in the 1959 Chevy, while there is no intrusion at all in the 2009 model.

As the IIHS says, "It was night and day, the difference in occupant protection," says Institute president Adrian Lund. "What this test shows is that automakers don't build cars like they used to. They build them better."

Of course, injuries still occur in auto crashes and rear end crashes particular can still lead to whiplash injuries because of the unique injury mechanism that occurs.

You can see photos of the before and after crash here at the IIHS website.